In 1964 the Venetian Counts Nicolò and Luigi Donà dalle Rose committed themselves to create the port and the village. Almost everything was built spontaneously, following the inspiration and inspiration of the moment, looking at quality.
The idea of ââthe two brothers was that Porto Rotondo could become a "milieu" of artists and intellectuals, and the first to respond to the invitation were the sculptors Andrea Cascella and Giancarlo Sangregorio.
The first created the meeting point for vacationers: Piazzetta San Marco. The second created the little square of the "Vecchia Darsena" fishermen's dock. Twenty-eight masters of Gallura stonemasons worked the granite that was used by Andrea Cascella to shape the square, the staircase, the facade of the Church of San Lorenzo, its megalithic cross and the altar. The Church of San Lorenzo remained empty for a short time, as Andrea Cascella had done, until the young sculptor Mario Ceroli was called, who embellished the interiors with his magical wooden sculptures; to close the circle, the Ceroli was commissioned the Theater. 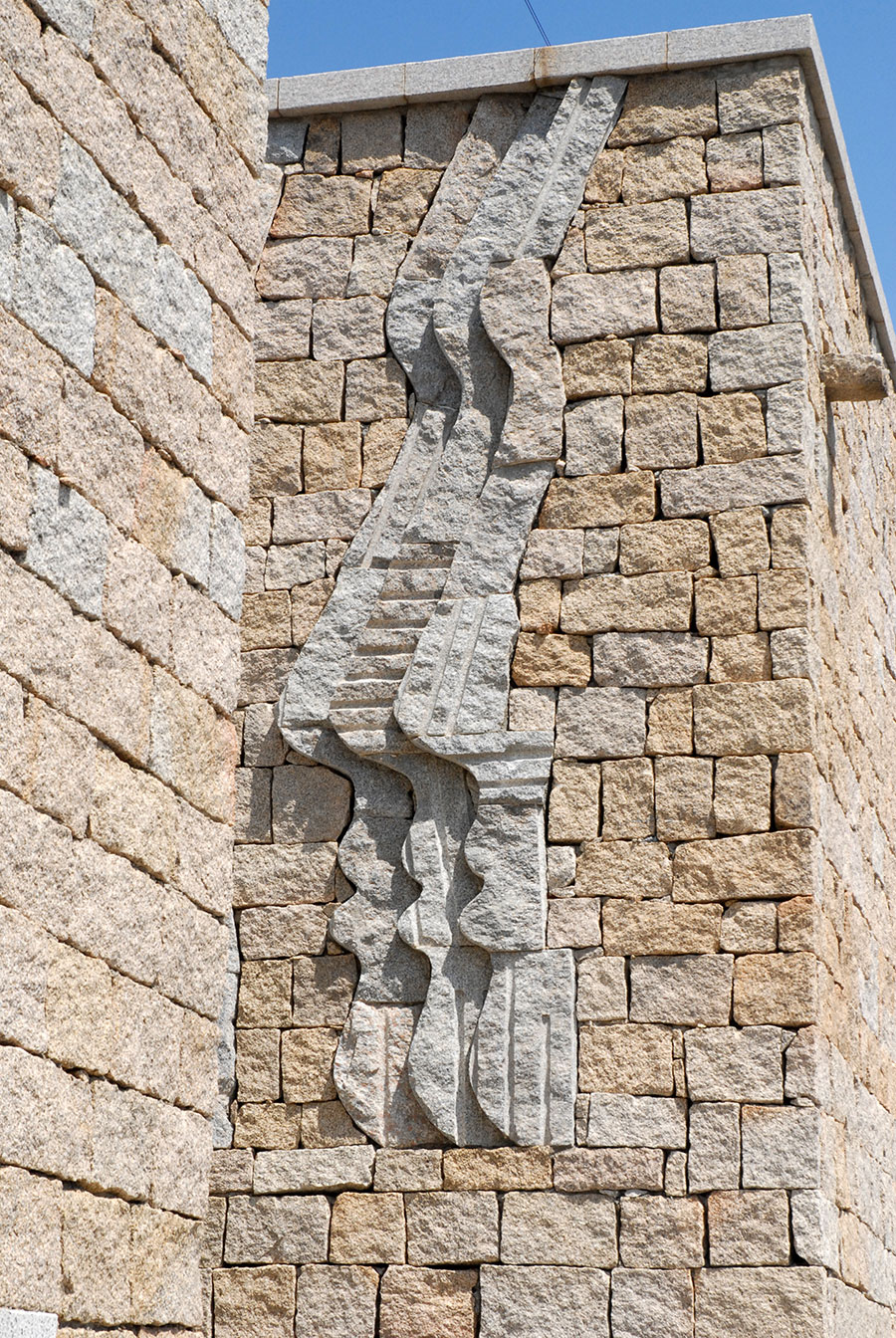 The initial idea was recently relaunched with the creation of the Porto Rotondo Foundation, which is completing the great artistic work begun 45 years ago. In 2007 the mosaic of Via del Molo, the now famous "food chain", was created, a work by the Breton artist Emmanuel Chapalain.
THE OLD DOCK
It was the year 1967 when Giancarlo Sangregorio (1925 – 2013), Milanese, shaped stone after stone in a small fjord coming from the harbour. What was initially known as “the old dock” is nowadays the square named after him. It looks towards the sea and has a large stairway which reminds us of calm and flowing waves, with dark curbs out of basalt and granite at the sides, both linear and curvy. “It’s like when you throw a pebble in the sea to form concentric rings, which get bigger and bigger”, an old fisherman loved to say. 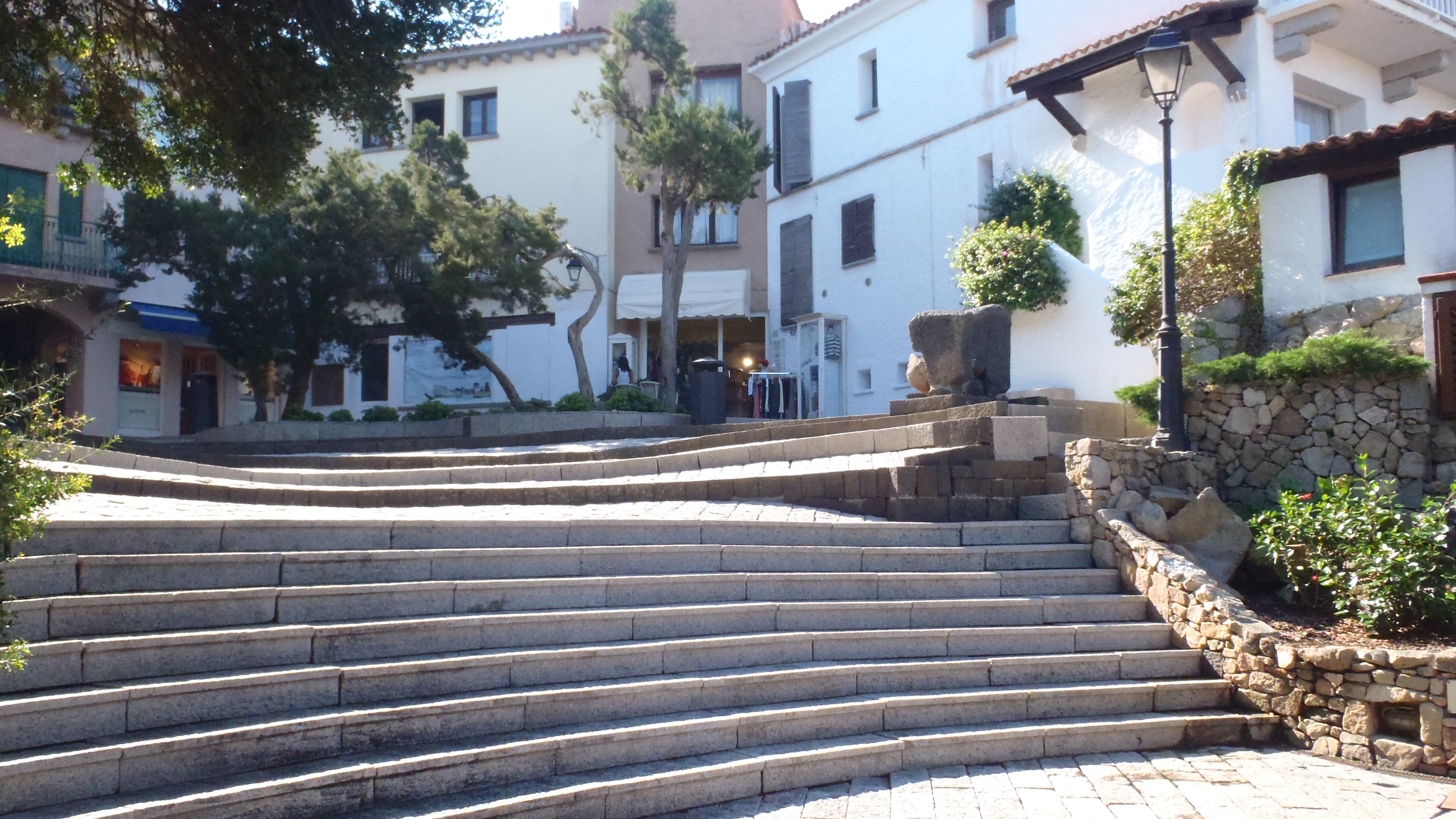 Every single stone in this corner of Porto Rotondo has a good reason to be there: just look at the shape of the gallery , which runs all along the right side all the way down to the seaï»¿. 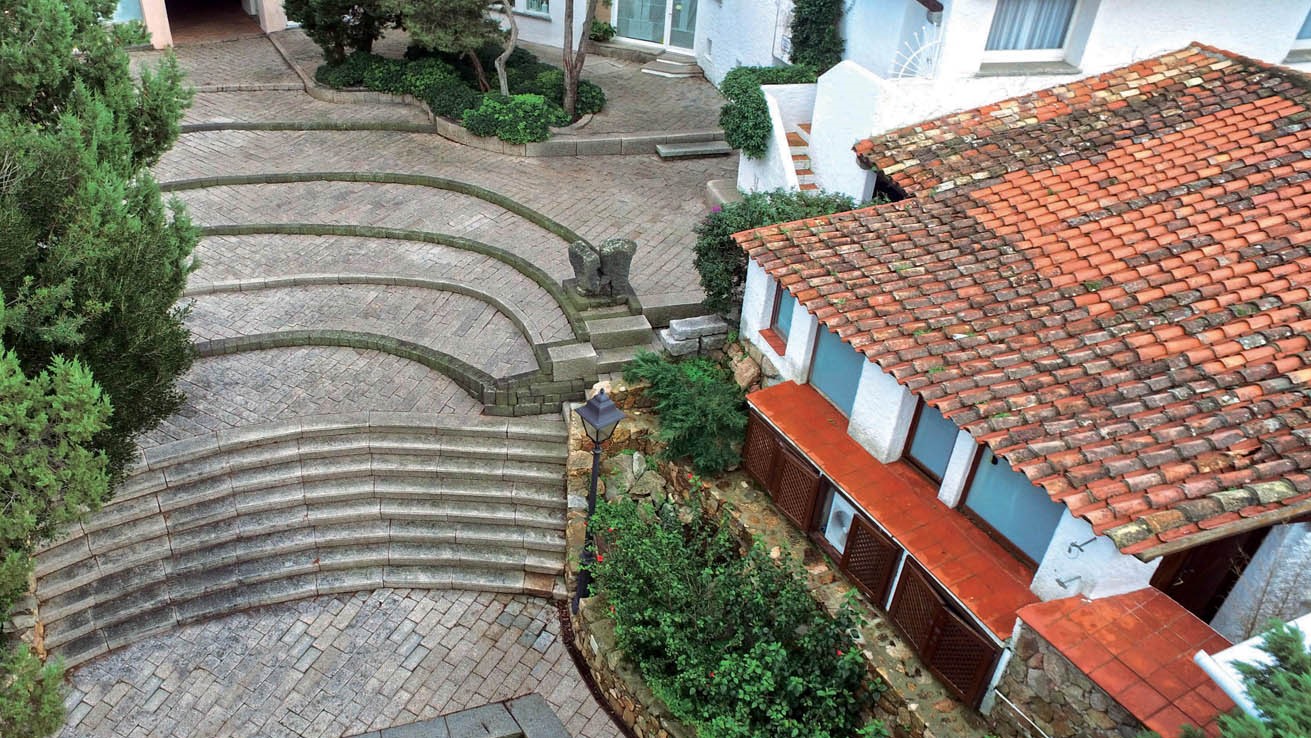 A row of granite boulders apparently casually near half columns, rectangular blocks, beams which remind us of nuragic dolmens, but in actual fact a parade of symbols of man’s architectonic growth. On the left of the stairway is a sculpture of the same artist.
SAN MARCO SQUARE
The heart of Porto Rotondo: stage and agorà, the ideal place to socialise. Piazza San Marco was designed by the sculptor Andrea Cascella (1919 – 1990), winner of the famous Biennale of Venice in 1964. This square worldwide relaunched contemporary art. It is cosy and at the same time imposing, with its rigorously simple paving. The Sardinian stonemasons working fifty years ago, had carefully cut and shaped stones coming from adjacent quarries already used in the Roman Age, following a centenary tradition. The conical trunk – shaped blocks create a harmonious concentric spiral effect which finish into a big, round, deliberately decentralised rock (typical of Cascella at that time), ending up in a vortex. 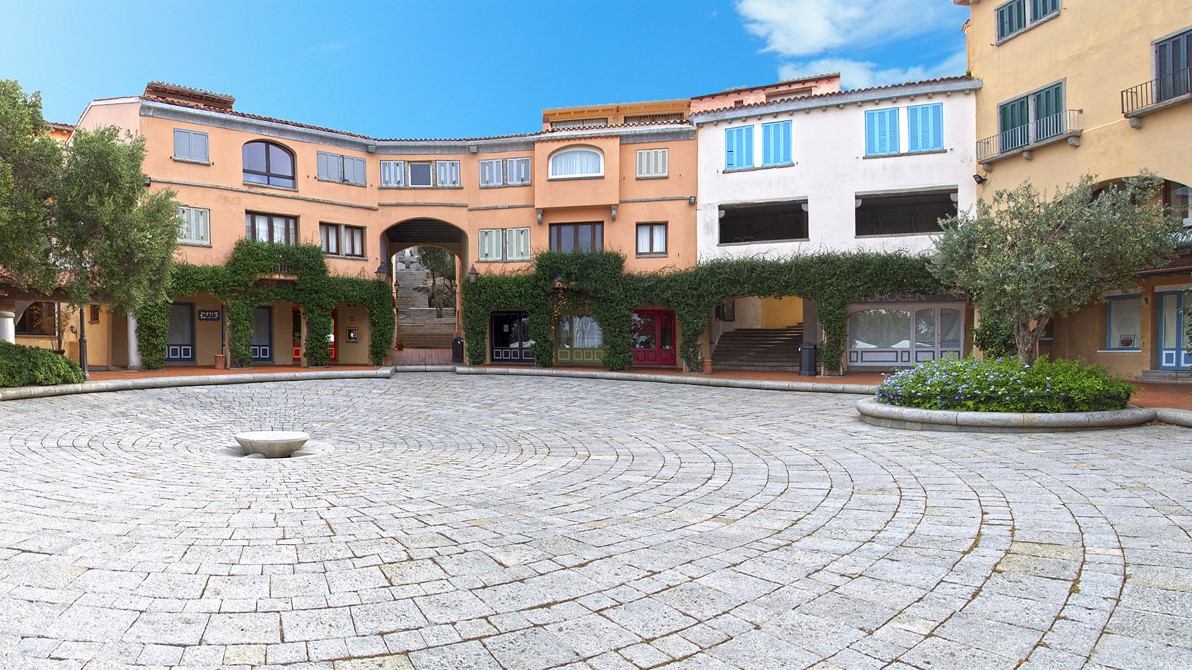 The technical project of Piazza San Marco is of the Milanese architect Vittorio Gregotti. This is what he remembers: “With Andrea Cascella we took a ferry to Olbia. The Porto Rotondo of today still did not exist at that time, the name was only a reminder of the perfect circular shape of the small harbour with crystal clear water. 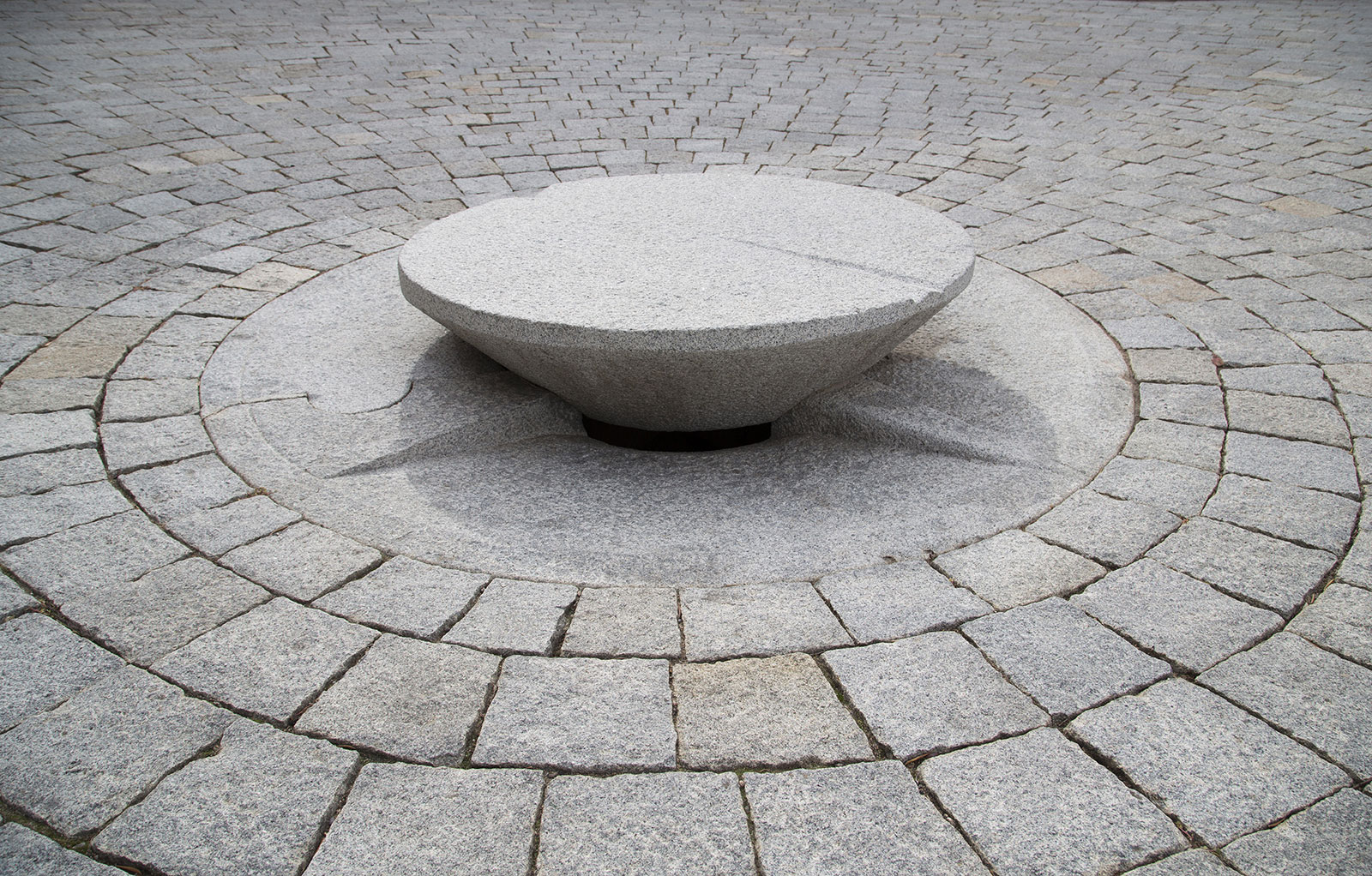 That is what gave us the idea that the square should be inspired by this shape: it would be round, slightly slanting and at the end, but not exactly at the centre, Andrea would create a sculpture. The idea was to make it all resemble a small basin with a plug.
THE CHURCH OF SAN LORENZO
Designed by Andrea Cascella and Mario Ceroli, the church of Porto Rotondo is dedicated to Saint Lawrence, which was also the name of the brothers Donà dalle Rose’s father. It is situated at the top of a majestic granite flight of steps which starts from piazza San Marco, St. Mark’s square. The church can be clearly seen by whoever comes from the sea but it was Andrea Cascella who wanted the temple of Porto Rotondo, symbol of holiness and also of civil living, to nestle among the houses of the village, as in Venice, and not isolated in a perhaps more scenographic space, as planned at the beginning. 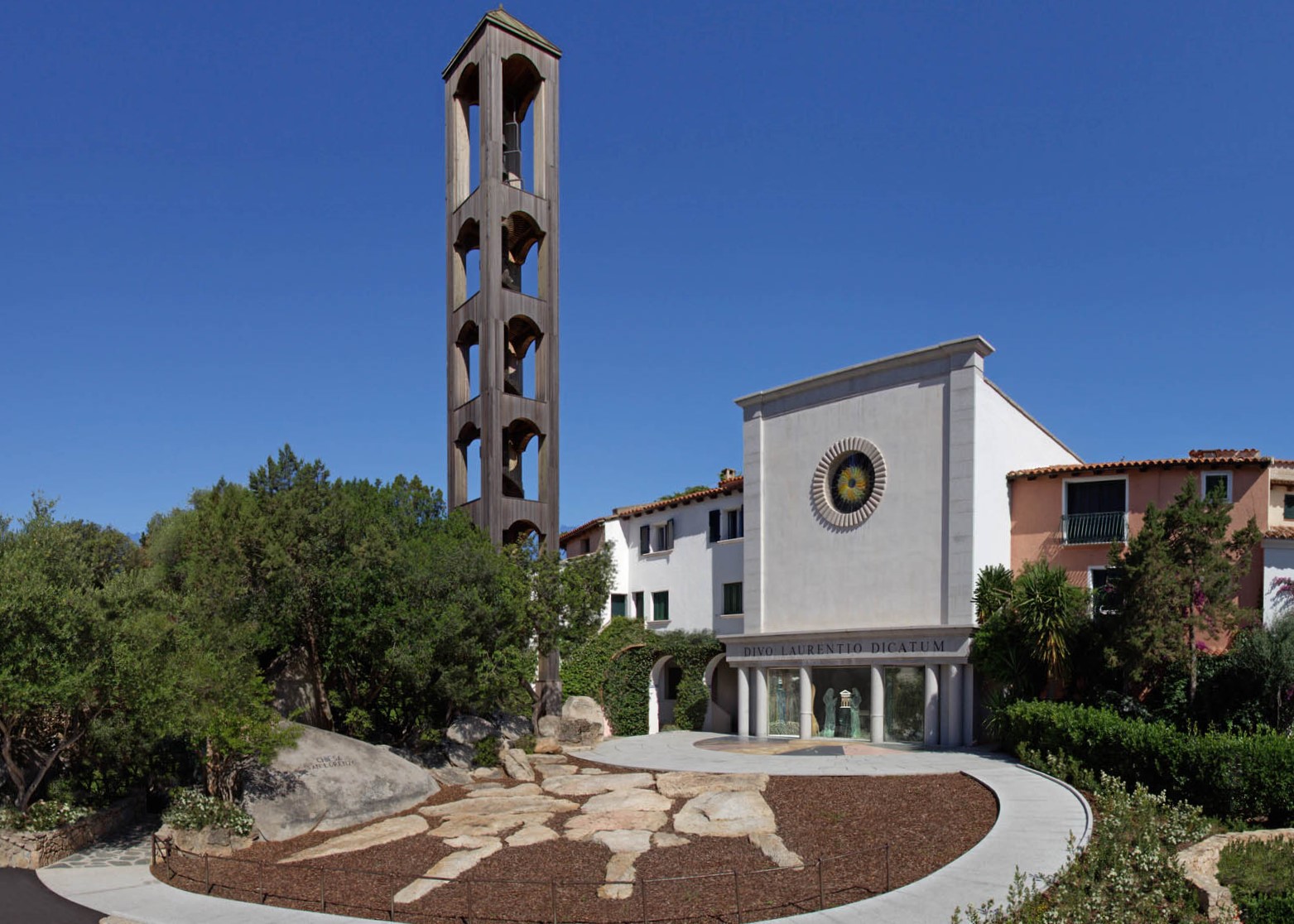 The works started in 1967 and Cascella wanted to mould his church in the famous typical Sardinian granite stone. He made it soaring high, with a linear and at the same time curvilinear facade, a “madonna-light-blue” edge and a big opening looking towards north-west, from where the mistral wind blows.
Both the megalithic cross in front of the entrance, made of two big intersecting millstones and the altar, represent the millstone which turns wheat into bread. The portal created in the shape of a cross, joining a thousand glass sheets proves it is not a fragile material, as many people think. 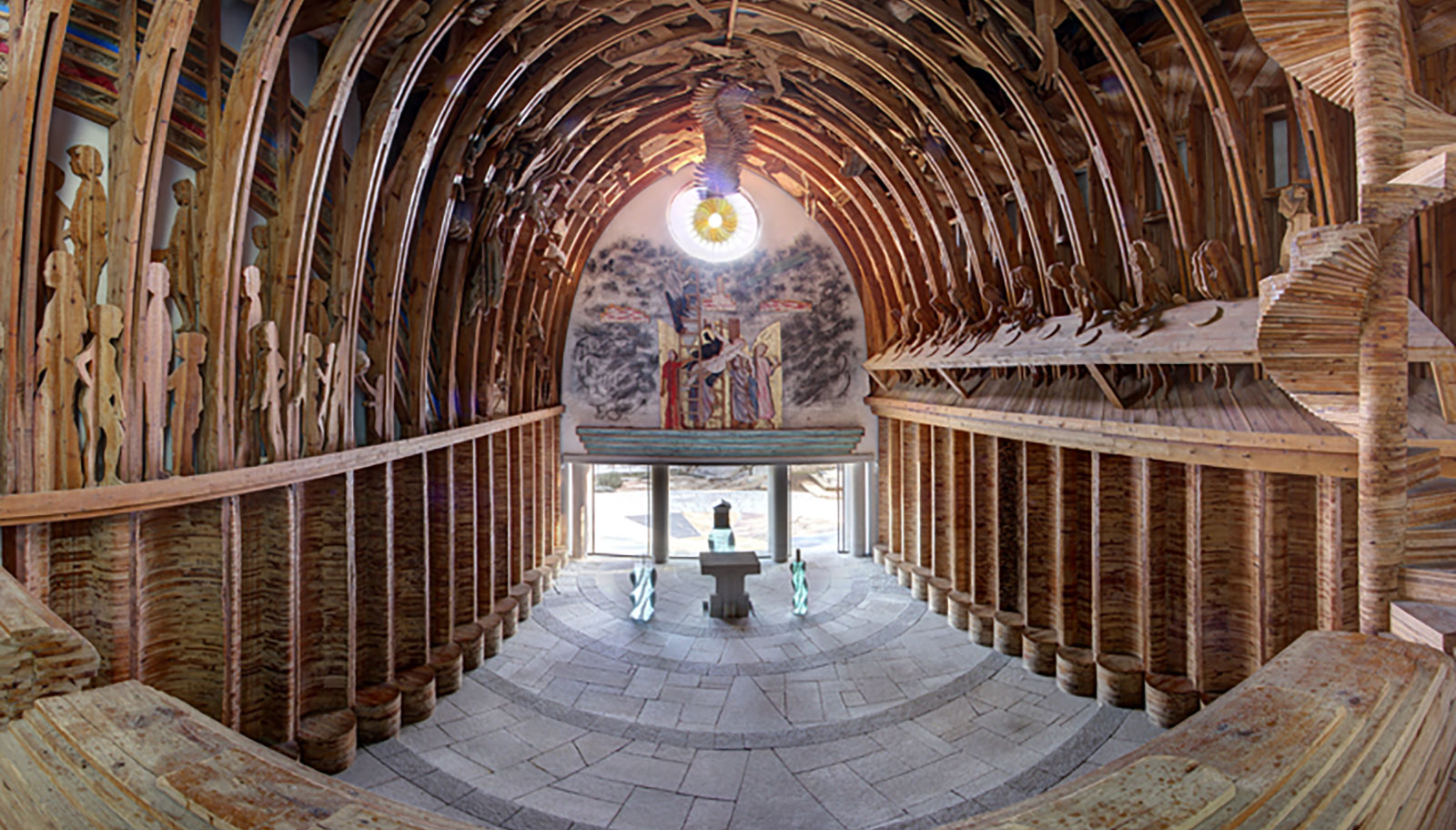 The ceiling of the church is an overturned hull. As you enter, on the right wall is the “Last Supper” (notice the head of Judas is turned and the bench below is covered with cusps).
On the ceiling a dramatic and complex representation of the “Last Judgement” mingles in an auspicious flight of doves. Above the multicoloured tabernacle made of Carrara marble, is “the Deposition” covered in gold leaf, which takes us back to the gold of the Italian masters of the years 1300 and 1400. 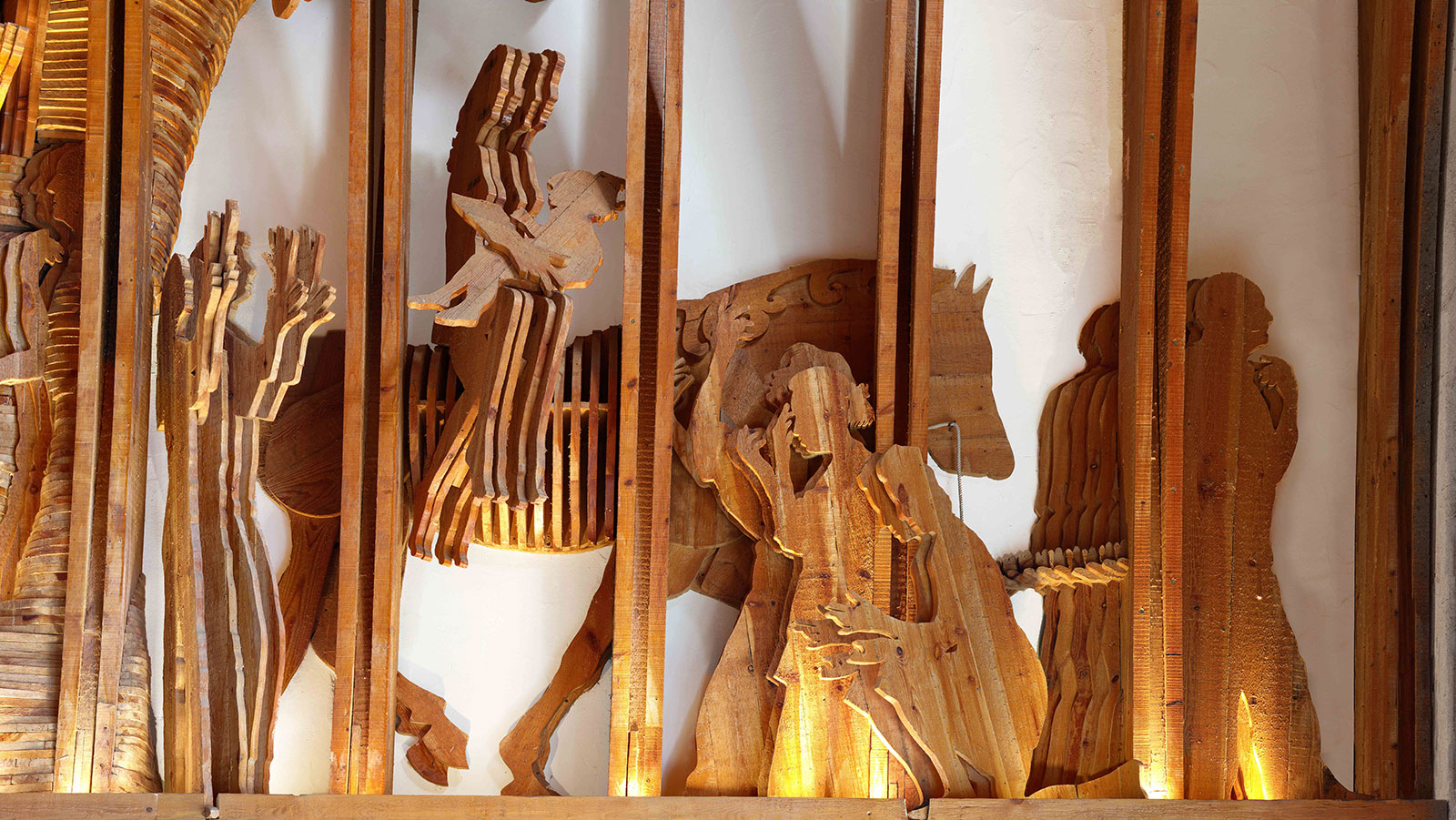 On the left wall is the “Flight to Egypt”. Its main characters represent the past and future generations of the Donà family. The tree of life and the rainbow represent the fundamental elements of the universe.
The “onda cantoria”, given the name of “Mistral”, the dominant wind of Sardinia, was designed in later years. In 2008 the Church of Porto Rotondo is further enriched by the construction of the bell tower, a daring work of art by Mario Ceroli designed by the architect G. Fini. It dominates the village with its height of 24 metres, visible from every perspective. It is a miracle of engineering and at the same time a masterpiece, entirely out of Russian pine wood. It has four bronze bells, each of which has the name of a saint engraved on it: St. Andrew, St. Robert, St. Sebastian and St. Mary. At its base is an antique stone, nowadays a christening font. Inside the tower is a winding helicoidal staircase known as “Jacob’s staircase”, imaginary symbol of spiritual, cognitive and moral elevation of man. A massive and at the same time graceful glass decorated with polychrome angels supports the facade of the church, made precious by the Murano glass rose window, in which profiles form a solar circle. In the parvis of the piazzetta della Leonina runs the history of the Popes: Pius XII, John XXIII, John Paul I, Paul I, John Paul II and Benedict XVI. The last profile is that of Mother Theresa of Calcutta. 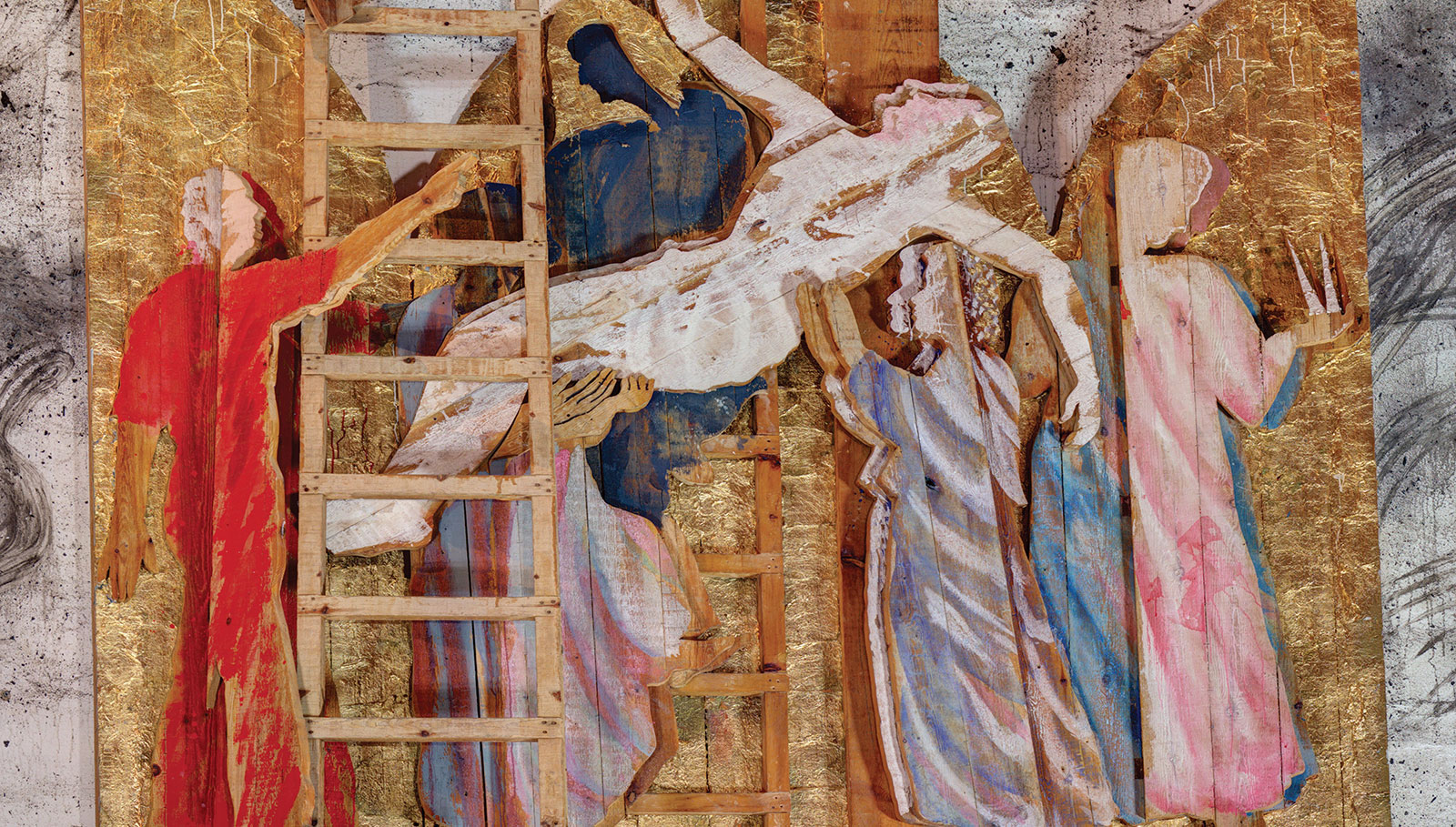 Mario Ceroli once again undertakes the idea of movement itself, trying to solve the theoretical paradox of the “permanent” and “motionless” sculpture, but always prone to discover how to deduce the mobility concerning his forms. 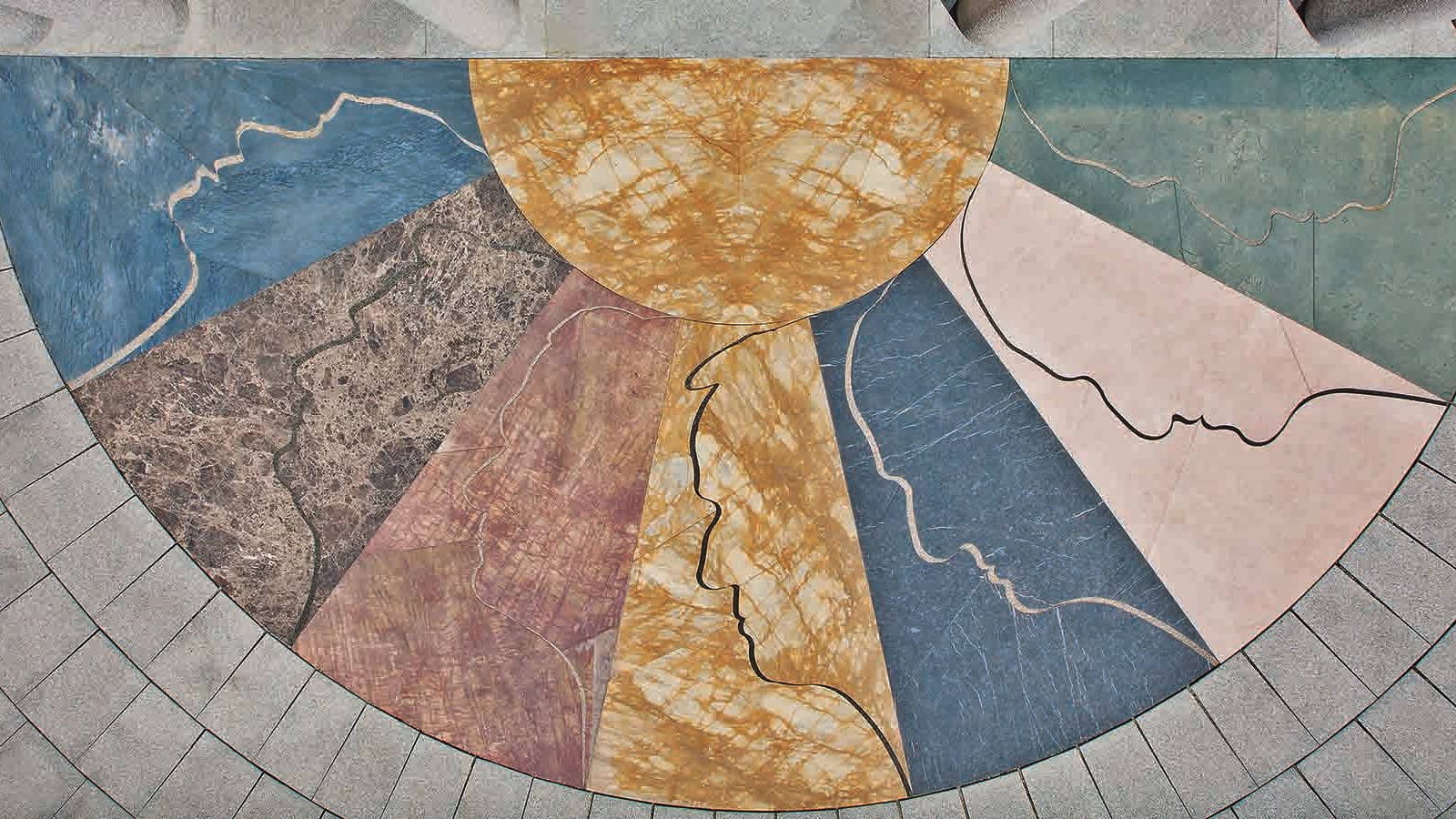 While building the church, one of the most famous sculptures of this artist was added to the cantoria supported by the pillars. This is a sculpture dedicated to that mistral wind which hits with so much strength the north facade.
THE MARIO CEROLI THEATRE
This theatre was inspired by the ancient Greek – Roman one, was designed by Mario Ceroli and carried out by the architects G. Fini and M. Sotgiu. It rises in axis with the church of San Lorenzo, the piazza San Marco and the harbour. The dream of the theatre came true when the plan of the “ideal town” on which Porto Rotondo was being built was accomplished with a space dedicated to art. The outward shell features impressive and symbolic high – reliefs. It introduces you to a semicircular context made of flights of steps which can sit 700 people and which ideally embrace the stage. Behind the stage there is a backdrop which alternates glass and cement, creating an unexpected perspective dimension. 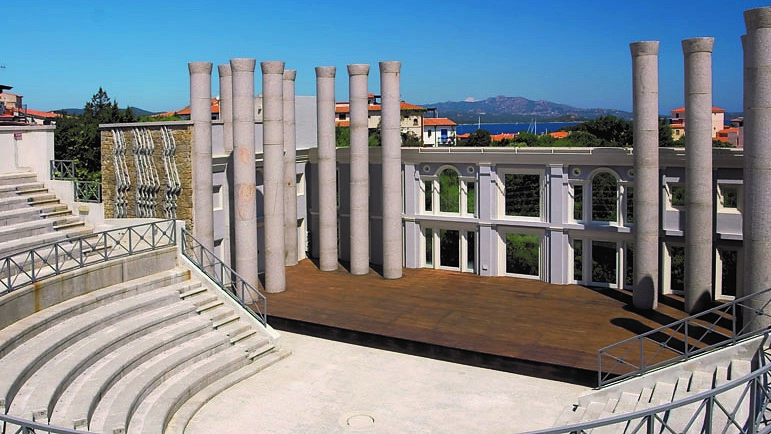 At the sides very high and dominant granite pillars recall the classicism reproposed even externally on the tambour, with regards to its classical symbology: the three doors of a Greek theatre; the obelisk, or the knowledge of ancient Egypt;. 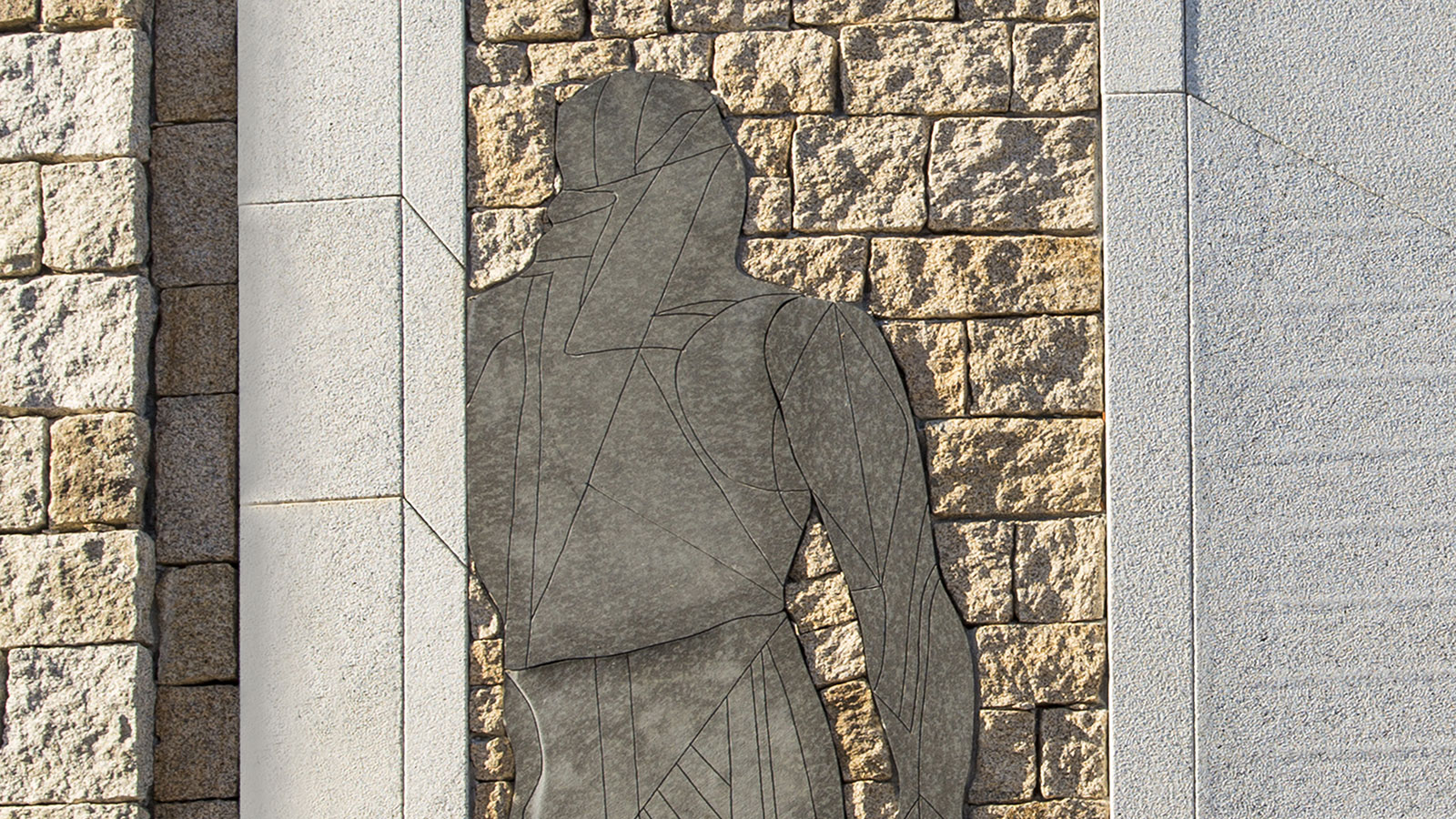 The pendulum of Galileo Galilei, all the science of Man, the same man made eternal by bronze and found in the sea of Riace, at that time Magna Grecia and nowadays Calabria. At the same time the construction of the theatre started. This was in the year 1972.
THE PROMENADE OF ART
It was the year 2007 and the inspiration of the young Breton artist Emmanuel Chapalain had already obtained a great success for the exceptional creativity and the daring combination of genres which led him to create realistic and surrealistic creatures, using the most different materials: aluminium, wood and more modest recycled materials. Long stays in Porto Rotondo result in his including stones among his working materials and in his perfect intuition. This being the sea and its creatures and the resemblance with the destiny of man: the ferocious merry - go – round of marine creatures whose fate is the unavoidable Mother Nature ritual of “big fish eats small fish”, which Chapalain translates coldly into “Food Chain”. 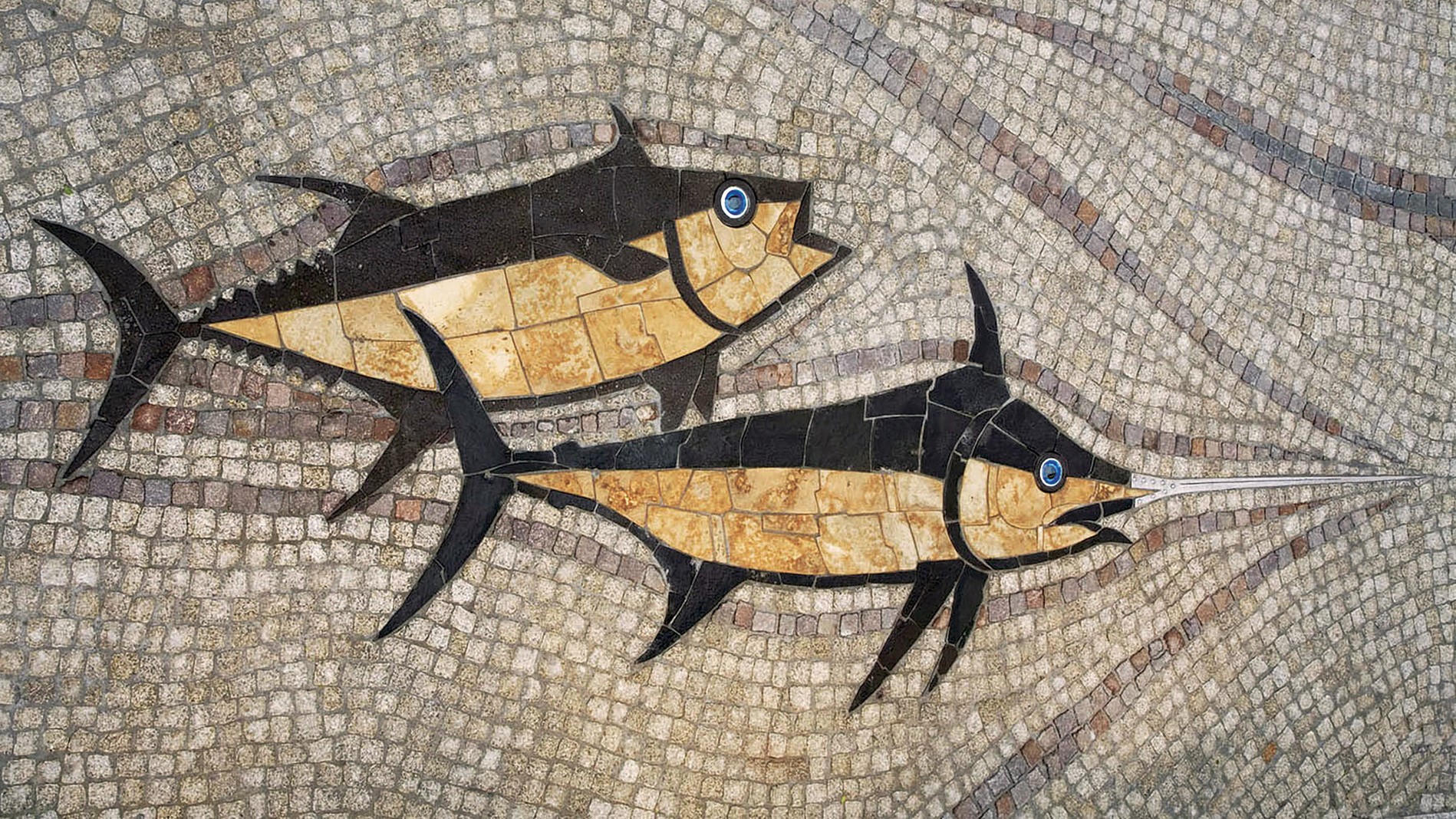 All this will, in a very short time, make the Via del Molo unique. The eyes of the fish, which light up at night, are out of Murano glass.

The Artist creates “street art” using: raw granite, yellow sandstone, red porphyry, grey basalt and, for the waves he chooses Orosei marble, introducing even Murano glass for the bright eyes of the marine inhabitants of the night.
Shark, hammer – fish, tuna and sardines, starfish and small shells. The sea world is all here where you walk to reach the harbour and remember that this is the eternal flow of Life which man should not interrupt. In 2016, continuing the ideal project of the “Sentiero dell’Arte” (“The Promenade of Art”), Emmanuel Chapalain made a spectacular and innovative mosaic paving in Via Belli. At the centre, made out of steel, is a rare white whale spotted by a team of divers in the Gulf of Arzachena in August 2015. While doing a research on Melville’s “Moby Dick”, Chapalain found out that another unknown white whale had been spotted even before that one. It was called “Mocha Dick”. 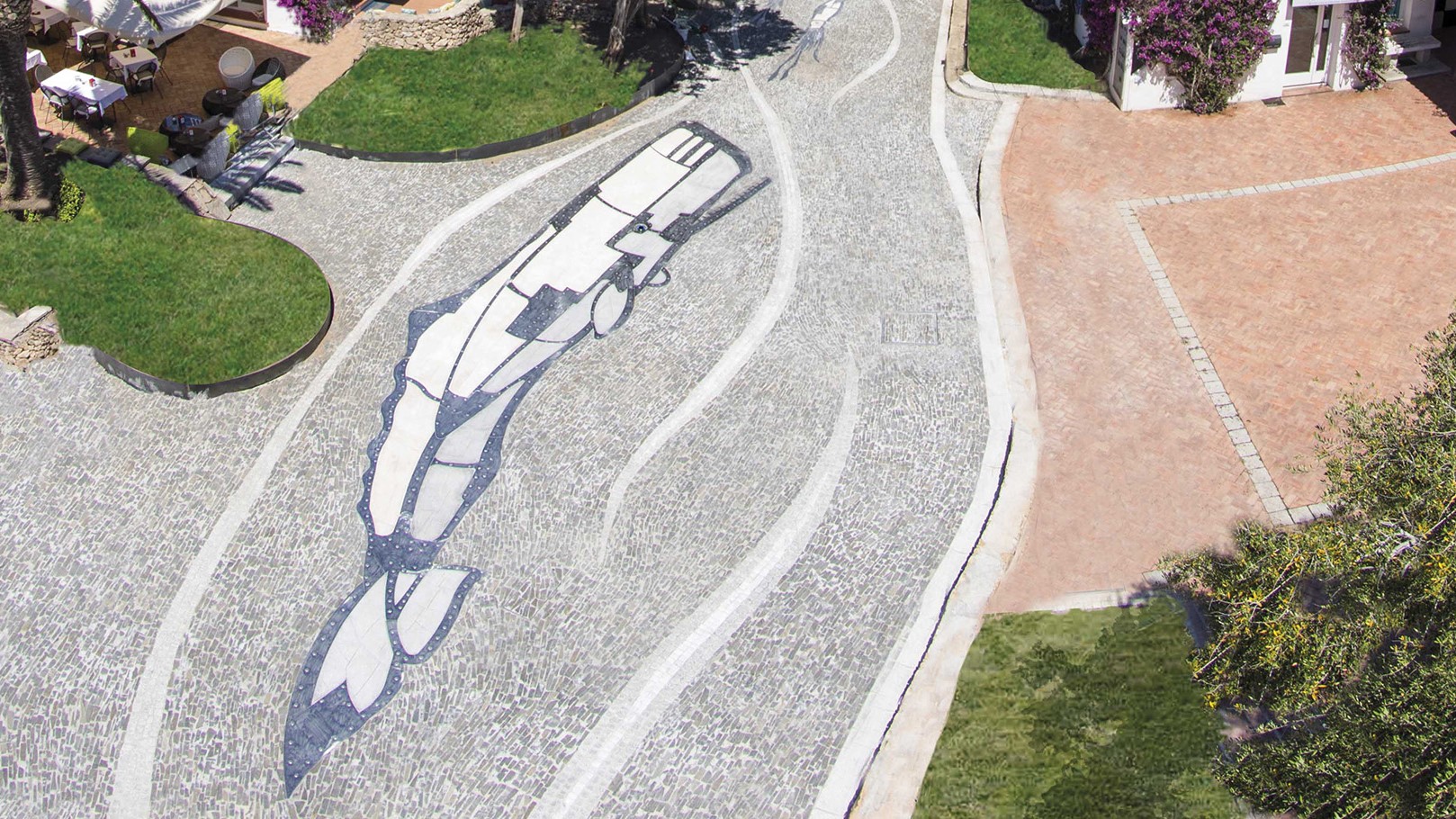 That is why he wanted to dedicate his sculpture to the latter. Graceful squids flee, frightened from the voracious mouth of the enormous cetacean, which confirms the ferocious law of mother nature.